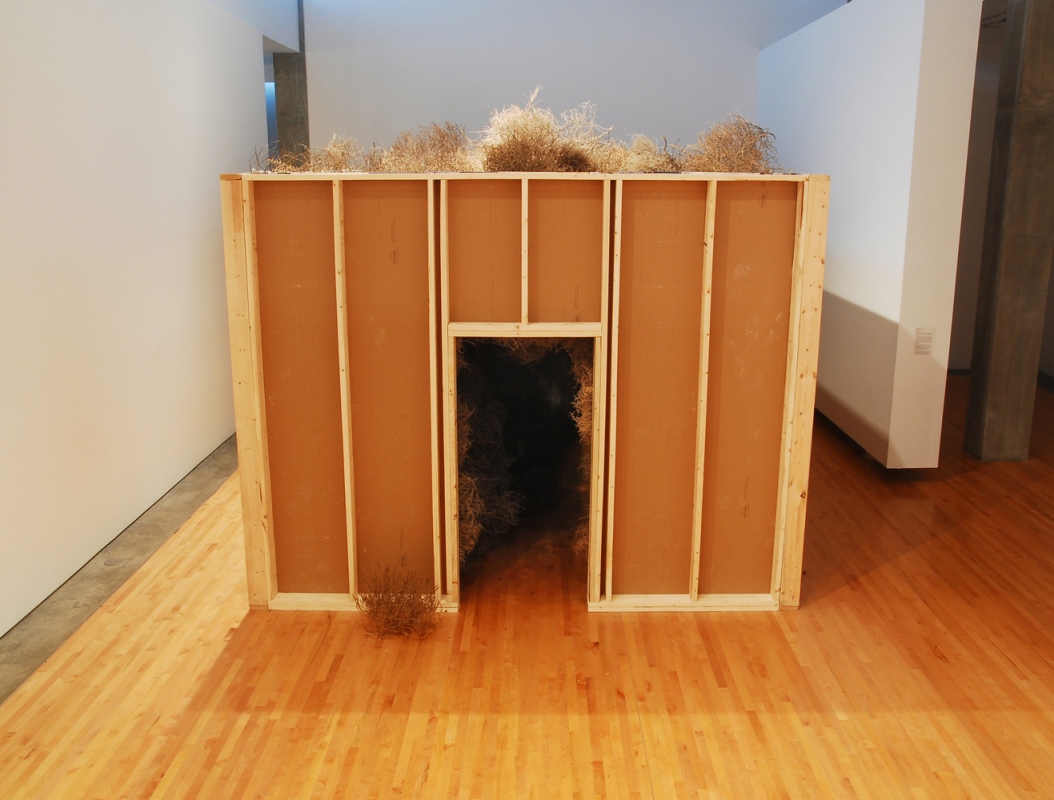 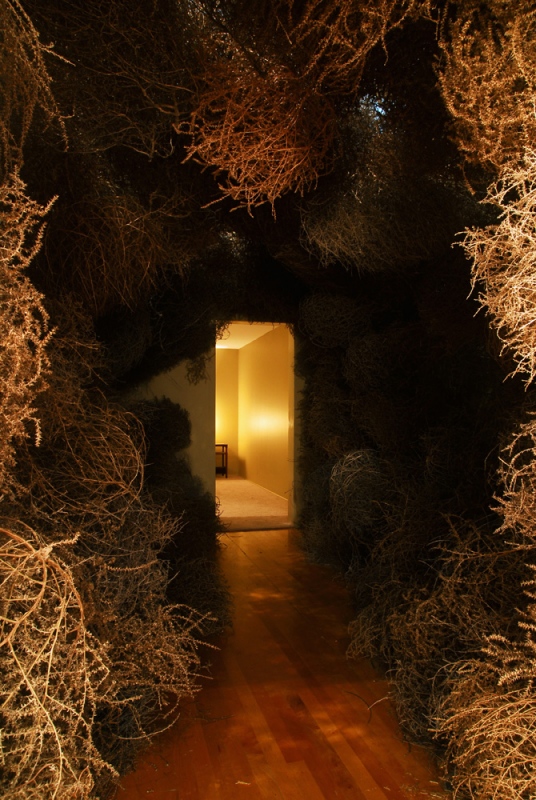 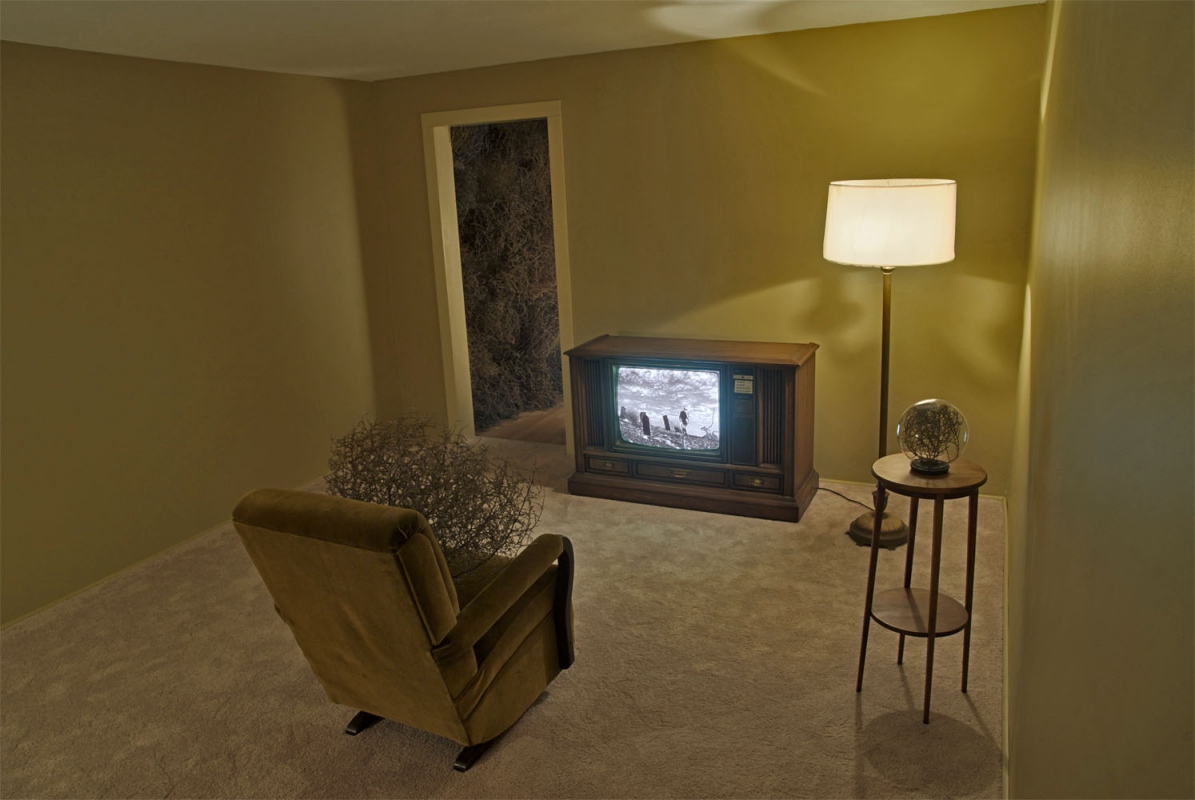 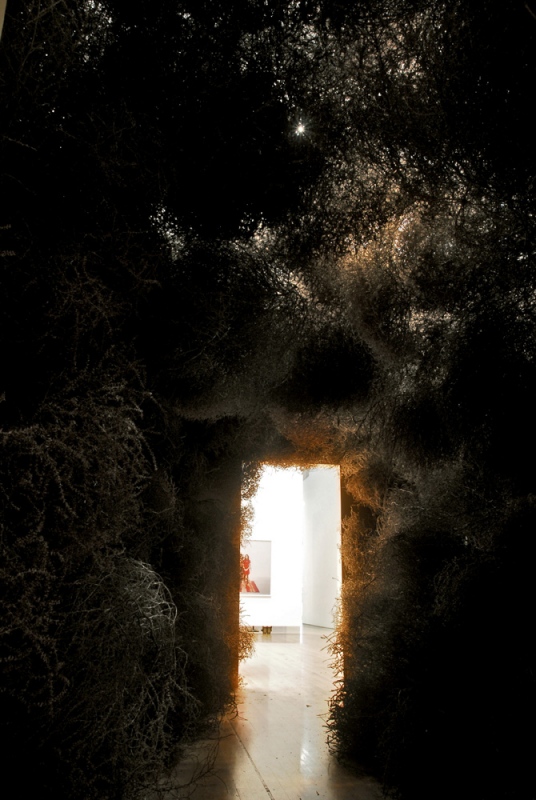 Move It On Over

DRIL's installation, Move It On Over and video work, Goodbye California, feature the tumbleweed as the main protagonist, highlighting the longstanding iconic and metaphoric position the plant holds within the public imagination. The video presents a catalogue of these instances within film history. Highly mediated and constructed, the identity of the tumbleweed has associations within the "western" genre of 20th century cinema - most often proliferated in Hollywood productions as a symbol of the desolate Wild West. The presence of the tumbleweed typically conveys a sense of impending conflict (a shoot out or "bad" guys coming through town). Characteristically paired with lone whistling or harmonica-driven soundtracks, the tumbleweed has come to symbolize a barren and transient landscape, that of the new and lawless frontier.

DRIL has removed the tumbleweed from its natural environment into a gallery context in an installation that mimics a theatrically staged film set so the mechanisms of media, filmic conventions and the museological viewing context are revealed and un-naturalized. The installation is meant to immerse the viewer in an entirely new environment. As DRIL presents it, the exaggeratedly anthropomorphized tumbleweed sitting alone in an armchair watching its own image or grouped together as a massive overgrowth guiding our passage through the installation, humorously brings its constructed and culturally naturalized identity into question. The immaculately designed and nostalgic living room setting for viewing Goodbye California also works to reframe our relationship to these well-established associations with the tumbleweed and the "western" genre.

DRIL has flipped the symbology of this plant to provide a more critical reading of the West. The commonly-known tumbleweed is actually the Russian thistle, accidentally introduced to California and the West Coast by immigrants; it is a hardy and invasive species that chokes out diversity as it grows. Once it matures and dries up, the plant breaks off its root system and tumbles far distances dropping its seed as it goes. In this way, the plant can be understood as a metaphor for diaspora and for histories of colonization that radically changed the landscape of the West.